For Poinsettia Growers, Every Day is Christmas

That’s how Mike Healey describes the sensation when he walks into the greenhouse at Greenway Farms. He’s surrounded by over 2,000 poinsettia plants. It’s acres of red, white, pink, burgundy, and ivory plants that are as much a part of holiday decorating schemes as fragrant evergreens and sprigs of holly.

While most people see poinsettias only during the holiday season, for Healey and his family, poinsettia season starts in July. That’s when they plant cuttings at their Howard County greenhouse. During the rest of the summer, they check the plants every day, watering, fertilizing, and checking for bugs. 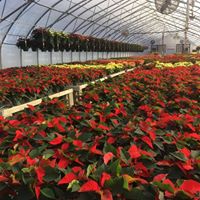 In September, they start the painstaking process of pinching back the excess growth on the bracts – the brightly colored leaves. Each of the 2,000 plants must be checked and pinched by hand, a process which takes several days. When that chore is finished, the plants spend the rest of the autumn filling out to their most beautiful ‘ready to buy’ appearance by Thanksgiving.

The poinsettias are a side business for Greenway Farms. The primary businesses for most of the year is providing garden centers and florists with wholesale annuals, herbs, and flowers from their 10 greenhouses. That changes in November and December, when they open Greenway Trees, a cut-your-own Christmas Tree farm in Woodbine, MD. That’s where the poinsettias are sold.

The greehouses, poinsettias, and Christmas trees are a big change from the family farm where Healey grew up. “In the 1970s, we had a more conventional farm. We grew cows, chickens, and pigs, mostly for our own use. But as time went on, things shifted. By the 1980s, my Dad was doing landscaping. My Mom suggested growing Christmas trees in the mid-1980s. We kept moving away from the traditional farming into greenhouses and plants.” He says it’s a lot easier to check on the plants in their greenhouses than to tend to the never-ending demands of livestock. 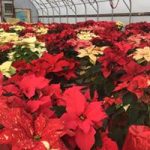 Poinsettias are native to central and southern Mexico. The Aztecs soaked the bracts to make dye. The milky, sticky sap from the plants is the basis for latex. There are hundreds of varieties, of which Healey sells nineteen.

The Atzecs called the plant ‘cuetlaxochitl.’ We can thank the first US Ambassador to Mexico for the much-more pronounceable name. Joel Roberts Poinsett first saw the plants shortly after his arrival in Mexico in 1825. He shipped some of them back to friends and botanical gardens. When they began to be sold commercially, their brilliant colors and seasonal blooming made them a natural for the holiday season. In honor of Poinsett, Dec. 12 – the anniversary of his death – is National Poinsettia Day.

Legend holds that the plants, called Flores de Noche Buena, or Flowers of the Holy Night in Mexico, were created through a miracle. A peasant girl had nothing to offer at Christmas services except for a handful of weeds she’d collected along the roadside. But her gift was so sincere that the weeds blossomed into the brilliant plants.

Poinsettias do not require a lot of attention, which is a welcome change from much of the commotion of the holiday season. Keep them in a well-lit, warm area and water them when the soil is dry. With a little TLC, they will bloom past the holiday season and can live to bloom another year. 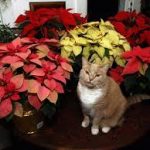 Contrary to warnings that make the rounds every year, poinsettias are not deadly poisonous to people or pets. Eating them can cause nausea and stomach problems, and the sap can cause rashes and burns around the mouth if it is eaten, so it’s still a good idea to keep theplants out of the reach of curious cats, dogs, and children to prevent any mishaps from marring the happy holiday season. 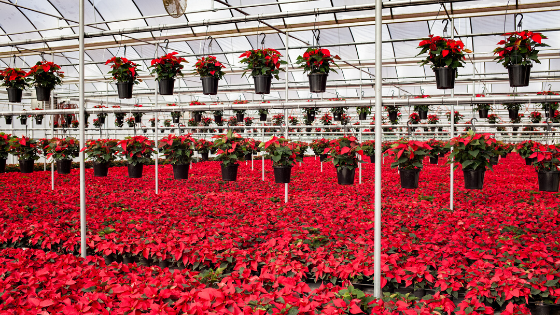