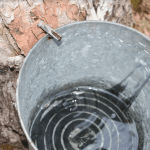 With his brother, nephew and father, Bishoff operates a maple sugar ‘camp’ in Garrett County. From mid-February through the end of March, they tend 350 maple trees on their fifth generation farm. “We’ve been a family farm since 1886, and we know they were making maple syrup in 1900. We have photos dating back to 1905.”

For most of the past 60 years, though, the Bishoffs were primarily dairy farmers. “We began dairy farming in 1958, when my dad graduated from high school. We still made maple syrup, but both dairy farming and making maple syrup are labor intensive, so we stopped producing syrup in 1992.” Changing economics have weakened the dairy market, and they sold off their dairy herd in 2018. Exploring new ways to keep the farm operating led them to grow commodity crops like corn, soybeans and hay, as well as going back to making maple syrup in 2018.

They are probably the smallest producer in Maryland, bottling about 320 quarts of Lucky Man Maple Syrup last year and selling most of it via word of mouth. That could change as they look at the growing demand for maple-flavored products. Some food industry analysts say that maple is becoming a bigger seasonal flavor than the ubiquitous autumn taste of pumpkin spice.

“The consumer demand seems to be there. Over time, the market price of maple syrup has increased with inflation and maple syrup is profitable to produce in spite of steadily growing production,” said Bishoff. “It is a unique product. Maple syrup can be processed into a several forms like candy, sugar or flavored syrups as well as used as a flavoring for a wide variety of other foods. It’s easy to certify a maple grove as ‘organic,’ because there are no fertilizers or pesticides used on the trees.”

Raw sap has the consistency of water and is slightly sweet. The time for collecting sap is short, from late-February until early April. Before that, the trees are hibernating and not producing sap. After the trees start to develop buds, the composition of the sap changes and it doesn’t produce palatable syrup.

The process starts by drilling a small hole into a tree and slipping in a small spout, called a spile. The clear sap runs through the spile and into a bucket. The sap is then boiled rapidly to evaporate the water. The longer it’s heated, the more concentrated and sweeter the syrup becomes. As the moisture evaporates, the syrup becomes darker. Heat it long enough, and it reduces into a granulated form, something like brown sugar. Syrup is ‘graded’ according to its color, with each color having a different intensity and culinary use.

While some commercial processors streamline the collection and evaporation processes, the Bishoffs are still using the traditional methods. They gather the sap by hand from buckets and remove all the water from the sap in a large pan over a wood and coal fire in an evaporation house constructed about 1940. “Our operation may be primitive, but we want to preserve the tradition. Right now, we are operating at capacity, but we’re considering how we can expand. We can easily tap up to 3,000 trees. There are a lot of maple trees in these mountains.”

Maple syrup is a cold-climate agricultural opportunity during a season where there are not a lot of profitable activities on farms. In the last 20 years, the number of commercial maple syrup producers in Garrett County has grown. Some of them tap more than 3,000 trees. Some of the big producers sell syrup by the barrel for flavoring, but Bishoff says they are not sure that is the direction they want to go. “We think there is a good potential for agritourism, maybe by opening the sugar camp and showing people the traditional ways of making syrup. We are deciding what market and clientele we want to serve.”

There are dozens of ways to use maple syrup in cooking. The Food Network has a recipe for maple-roasted bacon and Food Network Canada has 50 recipes for everything maple from cinnamon rolls to chicken to brussels sprouts. 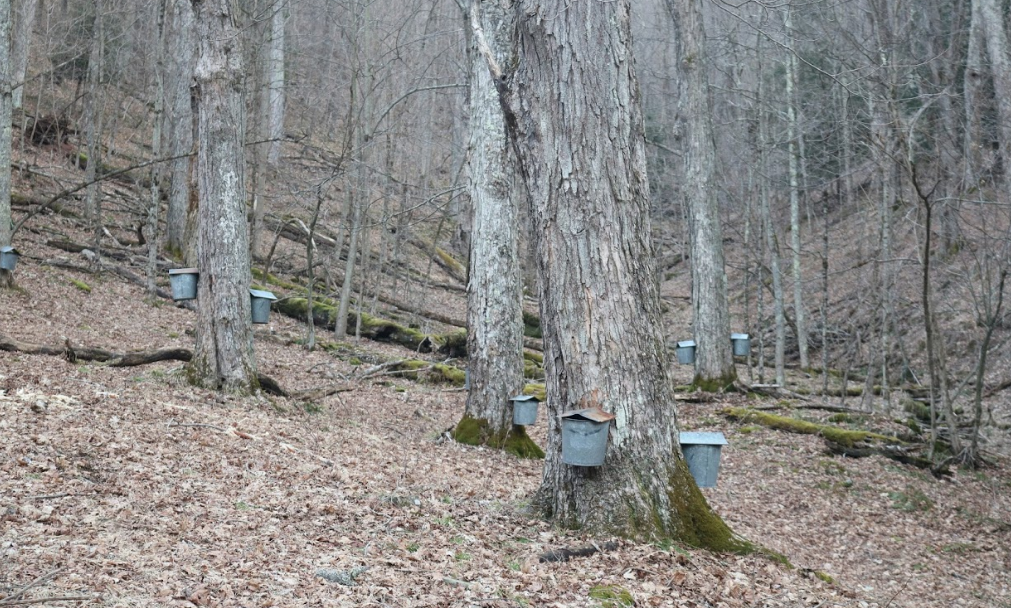