Drones are Flying High Above the Fields 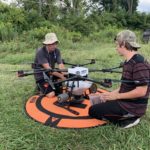 A drone from the Big Box store may be on your Christmas list. But, the drones used for farming practices are far from being toys. Maryland farmers are just discovering their potential uses, including spreading cover crop seeds.

When farmer Jay McGinnis told Erika Crowl, the University of Maryland Extension ag agent for Baltimore County, that he was using drones on his farm, she was intrigued. “I sit on the local Soil Conservation District Board with Erika, and I told her I was experimenting with using drones to spread seed for my cover crops,” he says. “She wanted to know more about using this technology.”

A fifth generation farmer in Baltimore County, Jay and his wife, Nicole, run a grain and cattle farm that sits near the Maryland and Pennsylvania border. In the past, Jay relied on helicopters to spread cover crop seed, but he was finding that helicopters were becoming more costly and harder to schedule. That’s when he began experimenting with drones.

For about a decade, radishes have been Jay’s cover crop of choice. In general, cover crops reduce soil erosion, suppress weeds and add nutrients to the soil. Radishes, a cool-season crop, also have a high protein feed value for his beef cattle herd to graze, reducing the need to feed them hay for a few additional weeks. The radish crop also takes up nitrogen from the soil, leading to less nitrogen that can run off into nearby waterways, and ultimately the Chesapeake Bay. Also, Jay likes that the radishes “winter kill,” or naturally die due to exposure to winter conditions, and he doesn’t have to apply herbicides in the spring.

To get the seeding job done, Jay enlisted a professional drone pilot, Kirk Floyd of KDrone Services. Kirk’s drone can carry 16 pounds of radish seed at a time. One hopper load can cover approximately 1.2 acres in about six minutes. It takes more time than a helicopter due to reloading the hopper and recharging the batteries. However, the drone’s benefits are that it works well in irregularly shaped fields and can maneuver around powerlines.

Erika’s interest in drones became more than a fleeting thought. She and Andrew Kness, University of Maryland ag agent for Harford County, developed a Maryland Soybean Board-funded study in 2020 to learn more about this farming practice.

So far, this study has shown that planting cover crops with the use of drones is effective and drones may be a method to establish early cover crops for those farmers who don’t have access to other aerial methods. With the help of farmers, like Jay, the researchers hope to discover more about the use of this technology.

“There’s more of a demand for drones where they could be used for field scouting and spraying crop protection products, in addition to cover crop seeding,” Jay says. “I can definitely see a future of using drones in agriculture and it’s only in its infancy.”

Hungry for more? Read about other ag uses for drones. Watch cover crop seeding in action. Learn about drone regulations in Maryland. 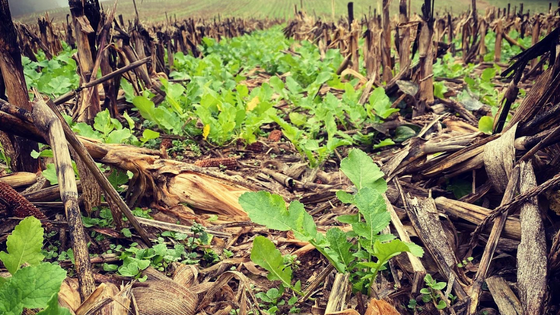