Do You Need A Rooster To Get Eggs? 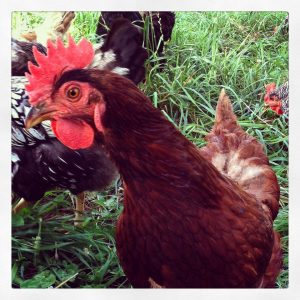 (VALLEY LEE, MARYLAND) — It’s one of those things that you don’t really think about. Until you think about it. And then, you can’t stop thinking about it until you know.

Where do eggs come from? Are they the beginning of baby chicks? If they’re not, then what are roosters for? And does it bug the chickens for us to take their eggs?

We caught up with Jackson and Chuck Webb at Swamp Fox Farm in Valley Lee, Maryland, for answers. Here’s what they say.

Eggs are the result of ovulation, not fertilization. “Hens do lay eggs without a rooster. They just aren’t fertilized eggs,” they told us.

In other words, the unfertilized eggs will never grow into a chick. On many egg farms, there’s no rooster to be found. Swamp Fox Farm is a family owned and operated farm in St. Mary’s County. They raise pasture-fed chickens for both eggs and meat, and grow assorted vegetables. Several egg-laying flocks — complete with roosters — graze in mobile coops that allow access to fresh grass in the pastures by moving along as the chickens graze the area. A little grain ensures a balanced diet.

But even if the flock has a rooster and hens, they tells us that up to a certain point you can’t tell a fertilized egg from one that is not.

Roosters serve more than one purpose in the flock. Besides fertilizing the eggs so that they will hatch into chicks, they run security detail.

“We have roosters to keep the ladies safe. Some roosters are better than others. Some roosters won’t even eat until he knows his ladies have eaten,” they said. “Roosters are great alarms if something is going wrong, like a hawk or fox attacking. They’ll make a lot of noise and even counterattack.”

Do hens mind if you take their eggs?

“No, in general hens don’t mind if you take their eggs,” Jackson says. Leaving the eggs in the nest can prompt a change in hen behavior, though. “Sometimes if you leave their eggs they will start sitting on them to make them hatch and (while they do this) they stop making new eggs for a little bit.”

The number of chickens raised on Swamp Fox Farm fluctuates from season to season. “We can have up to 500 chickens on pasture. We usually have four to eight pigs and we are starting on sheep. We will not raise any broiler (meat) chickens during the winter and the (egg) layers’ mobile house will be moved into the woods for protection from the elements,” Chuck adds.

Swamp Fox Farm’s signature? You could find a “lucky blue egg” in the next dozen you get — the color is a natural result of chickens of the Araucanas breed.