The Buzz about Bees 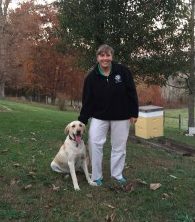 (ANNAPOLIS, MARYLAND) –  Mack and Tukka are sniffer dogs. Like their canine counterparts in law enforcement, they look for evil-doers. But the bad guys they sniff out aren’t found lurking in dark alleyways. They are bacteria hiding in beehives.

The pair are Maryland’s Canine Apiary Disease Detectors. Working with Cybil Preston, their trainer, Mack – a Yellow Lab, and Tukka – a Springer Spaniel – sniff for traces of American Foulbrood, a nasty, contagious bacteria that wipes out any bee colony it comes into contact with.

“The bacteria have a very distinctive scent that the dogs can smell,” says Preston, who is Maryland’s State Apiarist. “They alert on a hive when they detect it.” Mack, she says, tells her there’s a problem by sitting like a statue and staring at the hive. Tukka gets very excited, pawing at the ground and spinning in circles. When found, the infected colony is burned, which is the only way to kill the bacteria and protect other hives.

Maryland has about 2,700 beekeepers who tend to nearly 15,000 bee colonies. Each colony has between 20,000 and 80,000 bees. Most of Maryland’s beekeepers are new to what is becoming a very popular hobby and who have fewer than 10 “colonies” or hives.

Honey bees, along with other pollinators like Bumblebees, hummingbirds, butterflies, moths, wasps, and bats, are vital for the growth of vegetables, crops, and fruit trees. As they flit from blossom to blossom, they spread pollen which fertilizes the plants. They’ll fly as far as two and a half miles to find flowering plants, collecting nectar that is transformed into honey when they return to the hive.

The overall health of honeybees and other pollinators is threatened, something which concerns Preston and others in agriculture, because one of every three things we eat depends on pollinators. In addition to biological dangers like bacteria, bees face a loss of habitat from development, varroa mites, poor hive management, and more. There’s a lot of buzz about how to solve the problems.

Mack and Tukka are just one tool used to monitor Maryland’s bee population. Colonies must be registered with the state of Maryland, which helps the state manage them under their Pollinator Protection Plan.

In Maryland, the Department of Agriculture just implemented FieldWatch, an online registry that connects beekeepers, specialty crop growers and pesticide applicators around the state. This registry uses precision mapping tools to help commercial applicators know where beehives and specialty crops are located, so they can prevent problems.

Farmers help by planting habitat to attract bees. If pesticides are to be used on a field, whether that be an organic or conventional farm field, golf course or sports field, the application must be done by a certified pesticide applicator who has attended classes and obtained a license.

The Honeybee Health Coalition brings together agribusiness, conservationists, scientists, beekeepers, and government agencies in the United States and Canada to analyze the problems and find solutions.

For farmers or homeowners, careful use of pesticides is important. “Homeowners who want to use pesticides should carefully read and follow the label instructions,” says Preston. “Damage is caused by backyard homeowners and non-professionals who do not know the best and safest way to apply the chemicals. They sometimes over-apply the chemicals, or spray on windy days or at the wrong time of day.” Contact your local Extension office for advice on how to handle pesticides.

For homeowners, one of the easiest ways to help pollinators is to plant bee-friendly plants. Pollinators do best when there is a wide variety of plants to feed on. 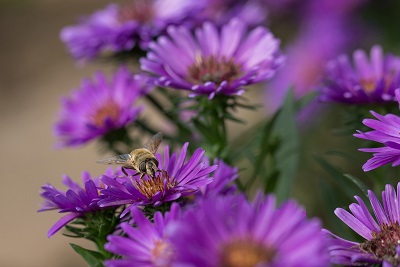