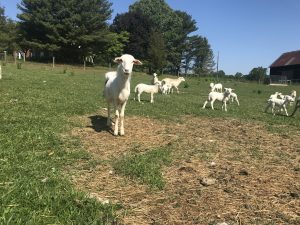 There’s a lot of special care that goes into raising livestock.

“Everyone is enchanted by the idea of all-natural, but the reality is that domesticated animals need humans to care for them and keep them healthy,” said Jamie Tiralla, co-owner of Monnett Farms in Prince Frederick.

On her farm, Jamie and her husband, Benson, raise cattle, pigs, sheep and goats for meat production. The last two, sheep and goats, are the two that require the most care and attention, especially in the summer, Jamie said.

“Our hot humid climate is difficult on animals for a number of reasons,” Jamie explained. “Sheep and goats have hooves that grow like our finger nails. With soft ground, they can’t wear them down like they might in a rocky climate. We have to help them out.”

Jamie and Benson routinely trim their goat and sheep’s hooves to prevent problems like hoof rot or infections. It also makes it more comfortable for the animals to walk around.

On spa days, as Jamie calls them, they bring the animals into a paddock area. Each animal is brought through a shoot and into a head gate that secures them while the farmers are working on the animals.

The exterior of the hoof is called a hoof wall. It’s a hard surface that is very similar to a human fingernail. Its purpose is to protect soft tissues, blood vessels and nerves that are underneath.

When trimming hooves, the first step is to take a pair of shears and manually cut the excess overgrowth. Any dirt is also cleaned from between the toes and around the hoof. At Monnett Farms, the next step involves using an electric tool to smooth down the rough edges and achieve a proper, level trim.

“The rotary trimmers have definitely made the work easier, especially as our flock has grown,” said Benson. “It’s still back-breaking work, but we can achieve a much better finish than just manually trimming the hooves.”

Benson said the work isn’t done after the hooves are trimmed, though. “Internal parasites, basically worms, are a major issue with sheep and goats in this region,” he said.

Once he’s done with the mani-pedis, he assesses each animal to determine whether or not it is healthy and affected by internal parasites. The Tirallas use a scoring system called FAMACHA© to screen for anemia in goats and sheep.

“The barber pole worm is potentially problematic and they’re especially prevalent during the grazing season. These type of parasites thrive in wet, humid environments,” Benson said.

As the sheep and goats graze, they ingest infective larvae. Within a few weeks, they can develop into adult worms inside the sheep’s gut. There, they latch onto the lining of the small ruminant’s stomach and suck blood. In some cases, the parasite can cause severe anemia or even death.

“Gastrointestinal parasites aren’t inherently bad,” said Benson. “They live inside goats and sheep, and that’s normal. In fact, it’s good for livestock to be exposed to a certain level of parasites so that they can develop immunity.”

Sometimes, however, the balance can shift and an animal can become clinically parasitized. In those cases, Benson says that he relies on medications to treat sick animals.

“We have to be really careful when we’re treating animals with medications, like dewormers, and make sure that we’re only treating really sick animals,” said Jamie. “If medications are overused, the parasites can develop resistance and then the medication becomes ineffective. We can’t afford to not have an effective treatment for really sick animals.”

That’s where the FAMACHA scoring system comes in. Benson uses a special card with five different shades of pink on it to compare to the eyelids of the goat or sheep. The more red color, the healthier the animal. On the other hand, if the color of the eyelid is very pale pink or white, it could indicate a problem.

The FAMACHA score isn’t definitive, but it provides a good indication. There are other signs that Benson looks for, such as changes in the animal’s weight, the condition of thei coat, and things like scouring (diarrhea) or nasal discharge.

“We try to focus more on prevention than treatment. Using medication isn’t something we want to do, but sometimes we have to,” Benson said.

There are a variety of ways that the Tirallas work to prevent parasite infestations. One is through rotational grazing. Moving sheep and goats from pasture to pasture on a regular basis limits their exposure to larvae.

Selecting the right breeding stock is another important method for mitigating internal parasites. “Some breeds do better than others,” Benson explained. “When we select stock for our farm, we are looking for animals that can thrive in hot humid climates and that have a better tolerance for gastrointestinal parasites.”

Benson keeps track of each animal in a special journal. He knows when they were born, who their parents are, and which dates they had hooves trimmed. If he gives them medication, he marks that down as well.

“We keep a close eye on any animal that we have treated. If it is an animal that will eventually be sold for meat, we have very strict protocols to follow on withdrawal times. Any animal that has been treated cannot enter the food chain until the proper amount of time has passed,” Benson said.

Susan Schoenian is a small ruminant expert at the University of Maryland Extension. On her blog, sheepandgoat.com, she wrote, “Effective parasite control will involve a variety of management practices, including the targeted use of anthelmintics. What works on one farm may not work on another. What works one year may not work the next. Each farm, year and animal is different.”

“Everyone wants to think that there’s a ‘natural’ solution that’s best,” Jamie said. “Unfortunately, there isn’t. The most important things we focus on are pasture health, animal nutrition and genetics. Beyond that, it’s systematic treatment using the best tools available and only when needed.” 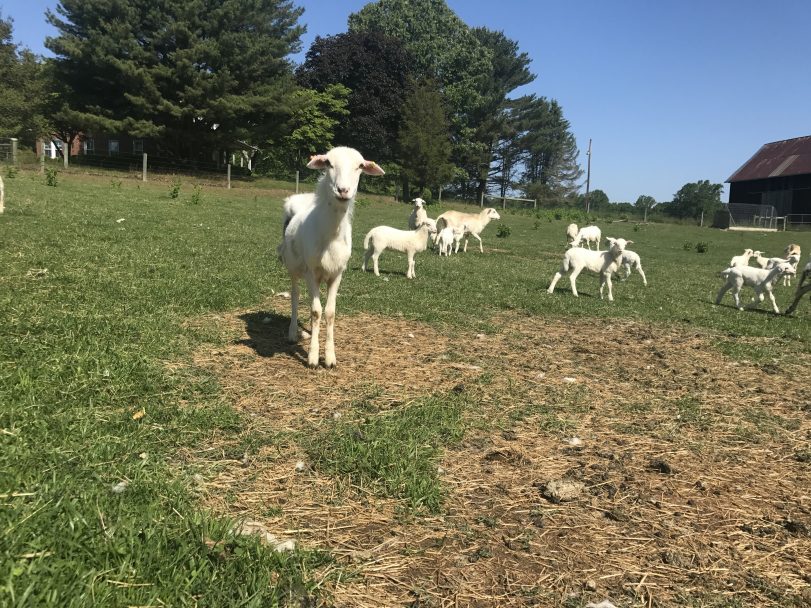