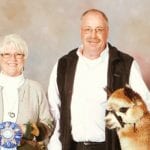 Phil and Vicki Liske are livestock farmers. But you won’t see typical cattle, sheep or pigs on their farm. Instead, you’ll find a herd of long-necked, fuzzy-coated, elegantly moving alpacas. Their Outstanding Dreams Alpaca Farm near Preston is one of about a dozen alpaca farms in Maryland.

The Liskes knew nothing about the furry natives of the Andes before 2005. Prior to this, they ran a diversified hay business, loading and delivering two tractor-trailer loads of hay a week to clients throughout Delmarva. But this type of work was physically demanding, and Phil wanted to find something easier to handle as he got older.

“I’m grateful to farmers and all of their work for crops and food, but it’s not for me,” Phil says. “My grandparents had a dairy farm and I spent summers there. We wanted to stay in agriculture, but from the beginning, we wanted to produce a valuable end-product that didn’t have to be slaughtered.”

When the couple first heard about alpacas, the animals were not much more than exotic status pets. Their first visit to a breeder was disappointing. “All they were doing was breeding and we didn’t see that as being successful for very long.”

Then, they met an alpaca farmer in Delaware who was raising the animals for their fur. Soft, durable and strong, it’s spun into yarn that’s prized by knitters and weavers. The market for alpaca fiber was growing as consumers discovered the qualities of alpaca wool and were buying coats, scarves, mittens, hats and sweaters. They decided alpaca farming was for them.

“Our first female alpaca was named Outstanding Omen. So, we named the farm Outstanding Dreams after her and our hopes for the farm,” Phil says.

Now, the Liskes have between 30 to 40 head who graze serenely in several pastures on the Caroline County farm. They are about as easy to tend as any animal can be. “Alpacas are easy keepers, which means they don’t need a lot of attention,” Phil says. “Each one needs about a half pound of grain daily and a bale of hay weekly. If the fields are lush, they don’t even need that much hay.”

Alpacas are social, curious and docile, but generally a bit aloof with strangers. Several of the herd at Outstanding Dreams, though, sidle up to visitors for petting and scratching. Stories that alpacas spit are largely exaggerated. The females spit to ward off an unwelcome suitor or the animals might spit if they feel threatened. They do “hum,” making a peaceful “mmmmmmm” noise when they are relaxed. Babies, called “cria,” are born once a year. Within minutes, they are bouncing around the fields, giving the farm a high rating on the “cuteness” scale.

Breeding today concentrates on improving the quality of the coat. Twice a year, a professional shearer arrives and gives the alpacas a buzz cut. Each alpaca produces between 3 to 5 pounds of prime fleece. That’s what is spun into strong yarn. “You can get 75 yards of good yarn from one animal,” Vicki says. “That’s 14 skeins of 175 yards each. We get even more second and third grade fleece. That comes from other parts of the body. Second grade is used for hand-spinning and needle felting. Third grade is off the legs and is coarser. It’s used for filler or to make rugs.”

When the farm started, Vicki didn’t knit or weave, but she took classes, found a mentor and the bug bit. She now runs the on-site store that sells alpaca products and has a group of knitters who gather regularly. Alpacas come in many colors, from black to tan and rust to white, but the fur is dyed many other shades with unusual sources for color. “We use Kool-Aid, Jell-O, cake icing coloring and food coloring,” she says. “Some people use organic material, like applewood and pokeberries. It’s all non-acid dyes.”

Outstanding Dreams welcomes visitors to their farm to enjoy the alpacas. The Liskes are happy to provide guided tours, and reservations are requested. The want to make sure that they can spend time with their visitors to teach them about these exotic, lovable animals.