A Family Farm Where Lavender is the Crop

(DICKERSON, MARYLAND) – Once upon a time, Rockville, Md., was farmland. But as the population around Washington, DC, grew, so did residential and commercial development. Sophia Watkins’ grandmother had a dairy farm in the path of the build-up. In 1963, she surrendered to the inevitable, sold her farm, and bought land at the foot of Sugarloaf Mountain in western Montgomery County, where she grew organic soybeans and grain.

Sophia Watkins grew up on her grandmother’s farm. She planned to be an artist, not a farmer. But when she finished art school, her grandmother was gone, and the chores around the farm were getting to be a challenge for her father. Her roots called her back to the land.

“I felt a commitment to the land and to the farm. I was raised with a sense of stewardship of the land and land preservation. I wanted to continue farming, but I had to make it current. I did not want to grow crops. I know younger people working small-scale vegetable farms, but I could not see us doing that. I wanted a manageable, shelf-stable farm product that was easier to sell with no spoilage or waste.”

After researching the possibilities, she and her then-fiancée, now-husband Kevin Salmeron discovered lavender. Easy to grow sustainably, used in many popular products, it was ideal for their plans.

Soleado Farm has 3 acres planted with lavender. “There are 400 varieties of lavender. We had to experiment before we found the ones that grow well in Maryland. We plant 9 varieties including one that produces yellow blooms.”

Everything is done by hand, from planting seedlings, to harvesting blooms, to making lavender-infused products. Once plants are established, lavender needs little attention, just bright sun and dry soil. It takes about 3 years before the plants are mature and producing flowers for harvest.

The reactions of many visitors startles Sophia. “So many people tell me that they did not know there were farms in Maryland. They had never been to a farm before. That they never knew agriculture was a business. I’ve had people tell me they had never held dirt before or put a hand on a plant. It is very special to make a place where people can experience nature.”

Sophia distills the plants for essential oils which she uses in body care products, candles, and bug sprays. “Most of our sales are direct retail through our website. We would like to go to markets and artisan craft fairs that are toeing the line between crafts and agriculture to educate people, but there are only so many hours in a day.”

The farm also has twenty beehives with a population of about 40,000 bees. They buzz through the fields, pollinating the lavender and making lavender honey, which is a rare and much sought-after condiment.

Like on many Maryland farms, farming is a family activity. While Sophia works, her three-year-old son, Valentino, toddles around the farm, watching and playing and learning. “We do all of this for him. The farm has been here for three generations. I hope he will be the fourth.” 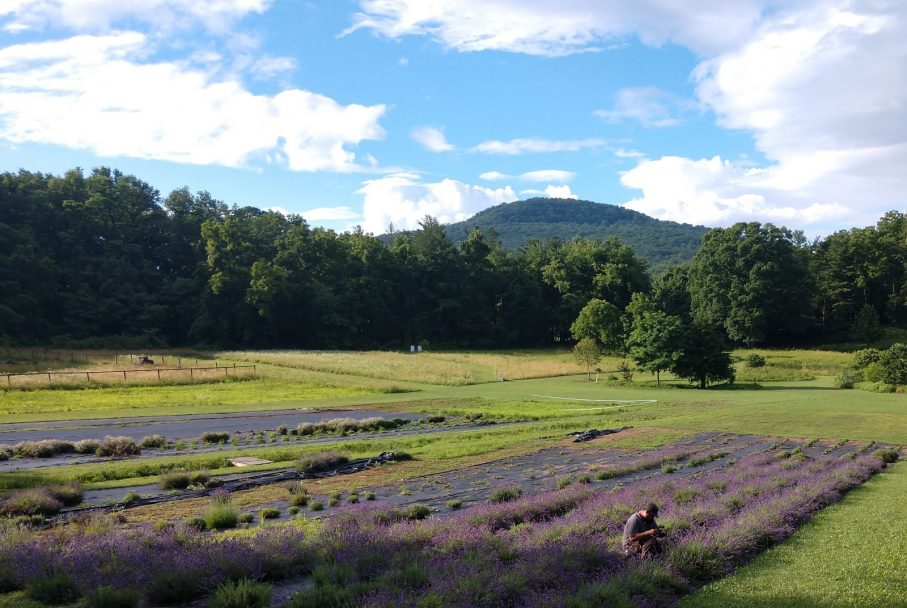